Festivals are finally happening after the pandemic years and we have been waiting for 3 years from some of the best Black Metal line-up in the scene with Under The Black Sun being one of them. While not as big and ‘glamorous’ as other festivals in Germany, this relatively ‘small’ fest organized by Folter Records has been going on for over two decades and we never managed to make it. However, that was guaranteed to happen once they announced bands like: Psychonaut 4, …and Oceans, and Arkona (from Poland). Coming all the way from the USA makes it a bit of a logistical nightmare, but we usually align more than a couple of festivals per trip to get our money’s worth. Here are our impression of each day of this event: 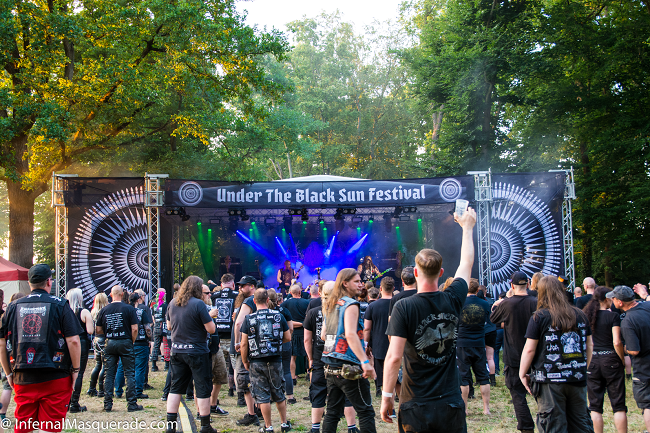 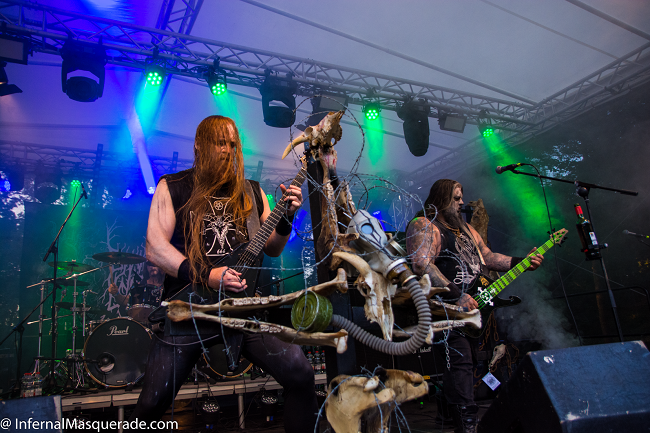 Arriving from Greece into Berlin’s new airport early in the evening meant that we had to do a mad dash to our rental car and then drive to Friesack, or more like Neustadt, where we found a nice hotel to sleep at. After going to festivals for almost 20 years now, we are old enough to know better than to camp and rough it up. While we miss the community aspect of camping at festivals, we prefer to be rested to watch bands for 7+ hours a day. Anyways, we made it to our hotel, dropped our stuff and off to catch the first band of the day: Darkmoon Warrior. We sadly missed Darkestrah, for like the third time in our life, but we just couldn’t work the timing to work for us. Never been on the festival grounds before, we took a very brief time to walk around and spot the food and beer places just before getting ready to take some pictures of the band and kick-off our weekend of music. The band’s set was pretty solid, with the crowd getting very into it. You can check out the band’s pictures on our day 1 gallery. 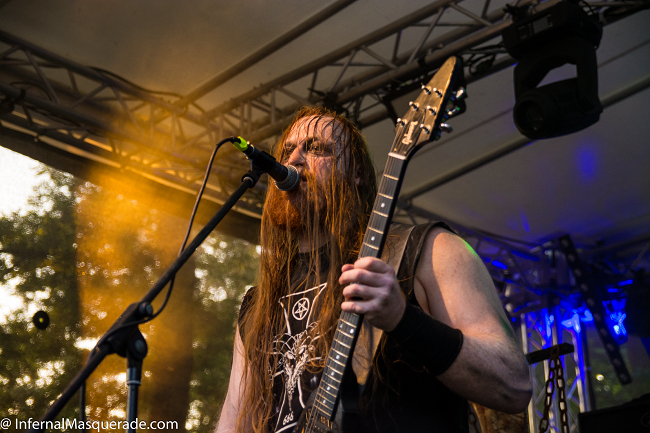 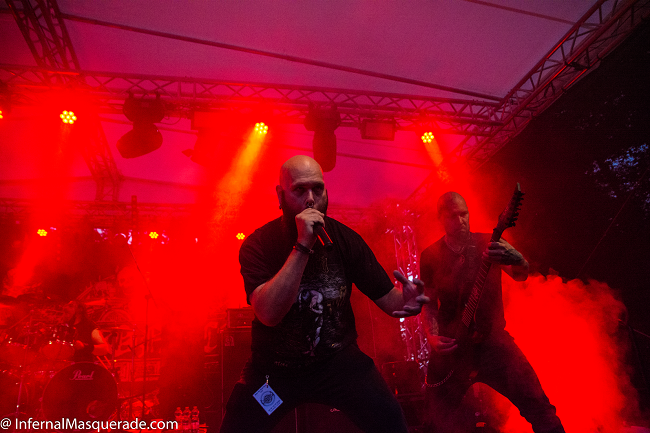 Being huge fans of Swedish Death Metal bands like Centinex, we were ready for Demonical and their crushing music, particularly after the release of “Mass Destroyer” earlier this year. Not disappointing, the band’s sound was quite crisp and very well balanced to create that atmosphere that only Swedish Death Metal can pull off. Too bad the band only played less than an hour, but it was enough to get people headbanging and moshing a bit.

The closing band was …And Oceans, a band that we have wanted to see live for quite a while but with all their break-ups and name changes, we just never managed to do so. However, luckily for us they got back together and released the brilliant “Cosmic World Mother” back in 2020. As the band that got us into Symphonic/Keyboard driven Metal music, we were not disappointed with them as they had their keyboard player, Antti Simonen, with them, a feature that many bands are opting to do without, taking away from their live shows as they only have backing tracks. Closing the first day, the band delivered a good mixture of very old, and newer stuff, with some old-school fans in the crowd really appreciating the moment, and with a few new converts from the younger crowd as well. Overall, a very solid and exciting opening day, and while we made it to a few bands, we have a busy list ahead of us. 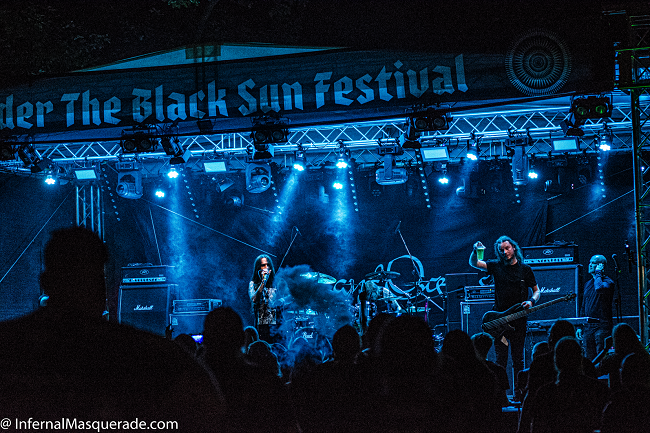 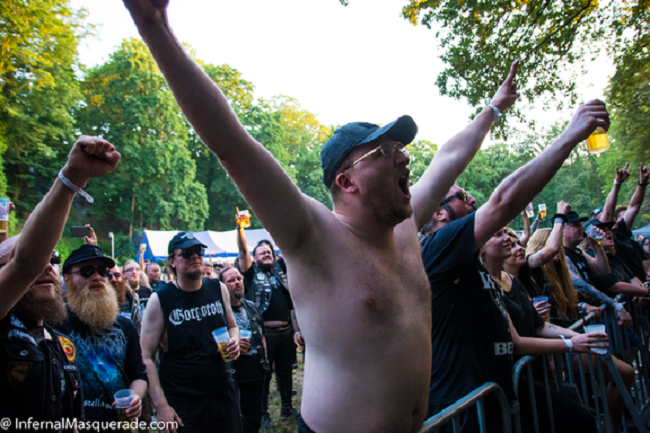 After finally resting from the crazy first day of traveling and getting to the location, we managed to sleep in for a while and get back to the festival grounds just in time for Germany’s Total Hate. While for some many of these bands are easy to watch as they play local club shows, for us, it is a total treat as unfortunately many of these outfits will never make it over to the USA, so festivals like this one are a great way to see all these ‘smaller’ bands that we like a lot, but won’t see anywhere else. 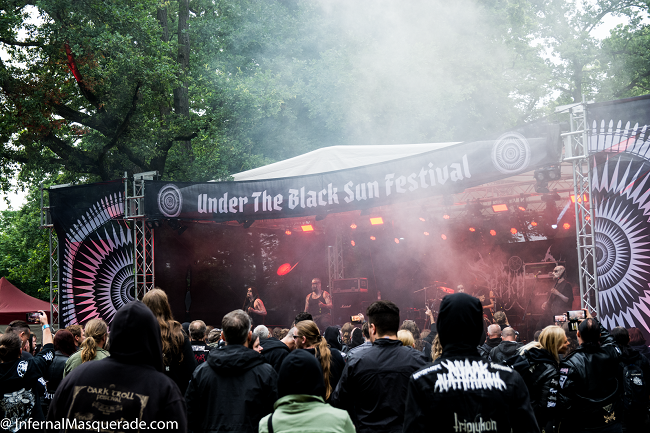 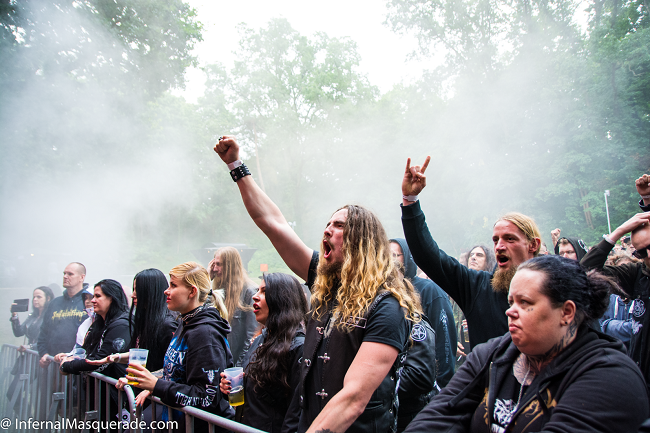 One of the highlights of the weekend for us was getting to see Poland’s Deus Mortem, and they did not disappoint with their incisive music and crushing execution. Next up we had Sarkrista, one of our favorite Black Metal bands of the last several years. We particularly enjoy how guitar-driven their music is, with some melody and brutal aggression thrown into the mix. The band’s live show was highly polished and brilliantly executed, completely having the crowd under submission with their sinister melodies. Norway’s Endezzma is one of those bands that has some of the core old-school Norwegian Black Metal elements that many try to emulate, but has followed its own path over the years and has released some solid albums recently. Led by Morten Kaalhus, the band did a pretty solid job in getting the crowd warmed up as the weather was turning fresher. 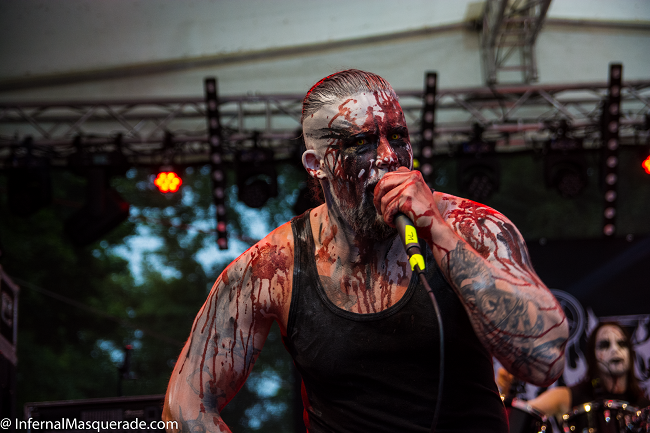 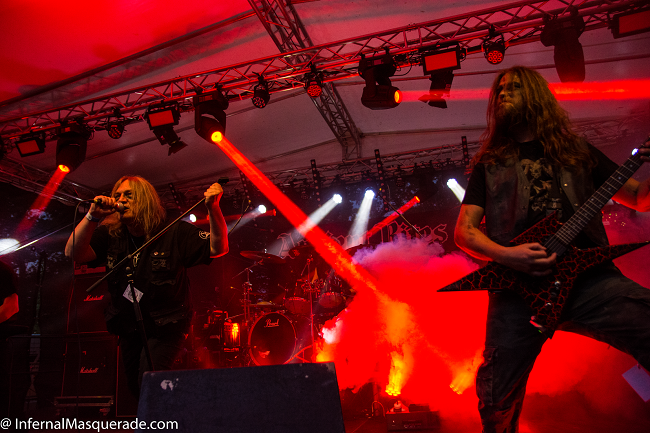 Another pleasant surprise in the festival’s line-up was Belgian outfit Ancient Rites, a band we haven’t seen in a while, but definitely had an impact in the Black/Thrash Metal scene. Gunther Theys is the only remaining original member, but the band was ready for action with a pretty tight set of most of their ‘classics’. Being quite animated and engaged, Gunther had the crowd going from start to finish. As one of the unofficial headliners for this event, Mgła has gained huge notoriety and following in the last couple of years, and seems to be playing almost every single festival or concert we have attended since the pandemic slowed down. Luckily for us, we love those guys and their very incisive and powerful music. As one of the most professional bands we have ever seen, Mgła kicked off their set right on time, with excellent lighting, and crystal-clear sound. Covering their faces with hoods as they rip through their punishing songs, no matter how many times you see the band, you have to appreciate how they bring their albums to life with perfect execution and solemn intensity. Sadly for us, we had to head back and miss the last band, but the day was nearly perfect with such a well curated assortment of mostly Black Metal bands. 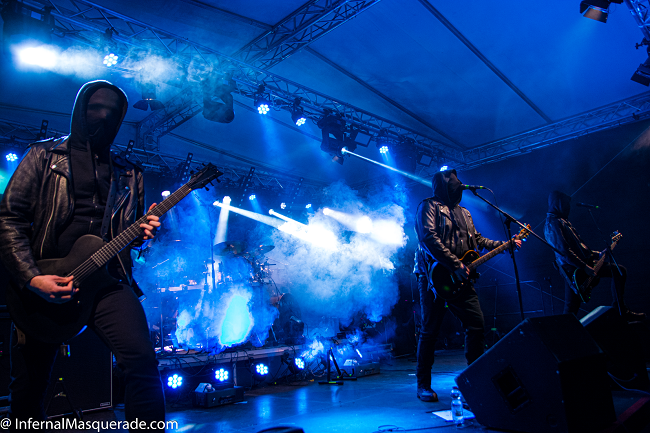 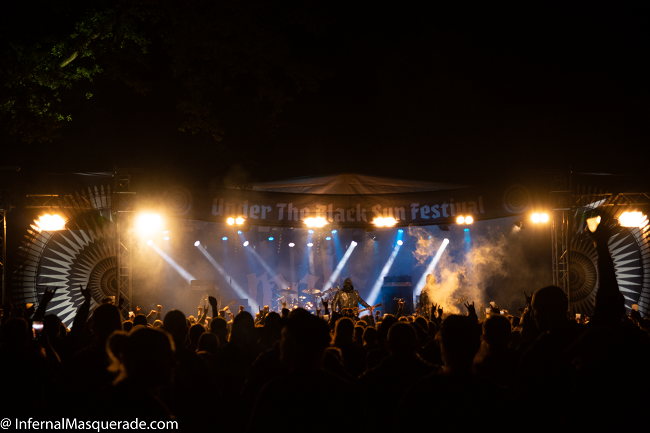 Last day of the festival and it was going to be a long one as Psychonaut 4 is closing the event and it's the band that we wanted to see the most. One thing that we haven’t mentioned much is that the small size of the event makes it easier to be able to get food or drinks while listening to the bands non-stop! There are also nicely shaded areas and plenty of spaces to sit on benches or the grass, in a nicely forested area, something that is not the case in many of the larger events. UTBS is definitely one of the more convenient and friendly festivals with all the previously mentioned amenities and also the campground close to the main stage and food areas. 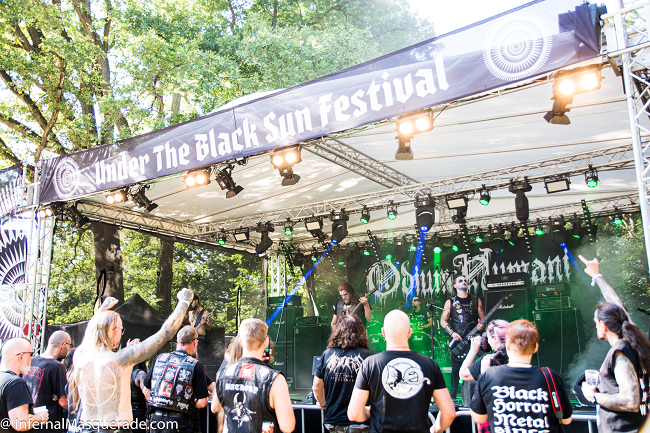 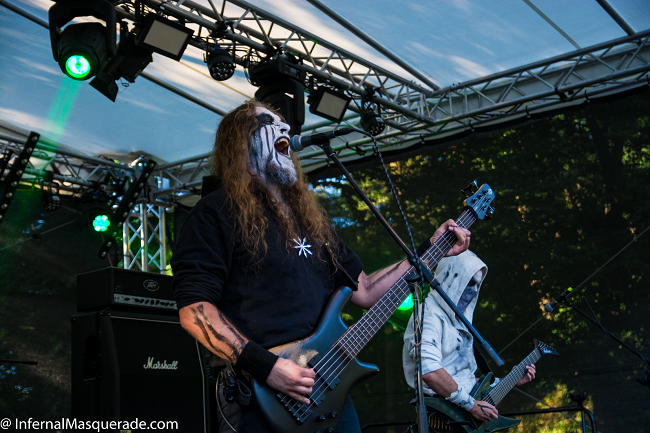 Getting back to the music side of things, we started the day with Polish outfit Odium Humani Generis and their harsh Black Metal filled with melancholy. We really enjoyed the band as one of the few that we didn’t know in advance, and we will definitely check out their latest release. Celebrating the release of their “Miasma of a Damned Soul” EP, Illum Adora quickly took the stage to a pretty large crowd that was ready for a hate-filled performance. One thing to note was the stash of dead rats that vocalist, Hurricane Hellfukker, had tied to his belt and that flew out to the crowd sporadically. While some of the previous bands in the last few days had energetic sets, this band took the cake with the sheer intensity of the singer and how everybody got into their show. 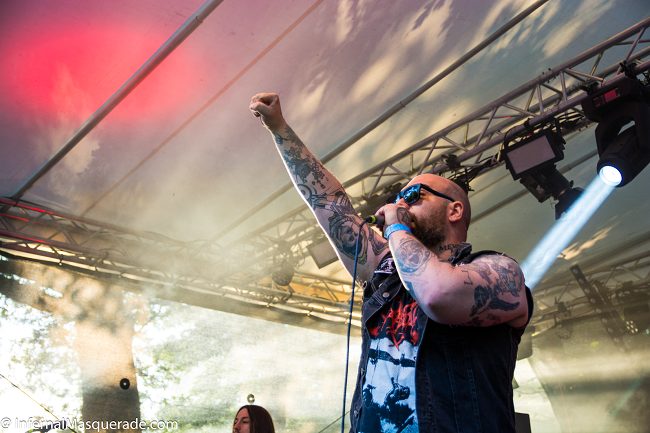 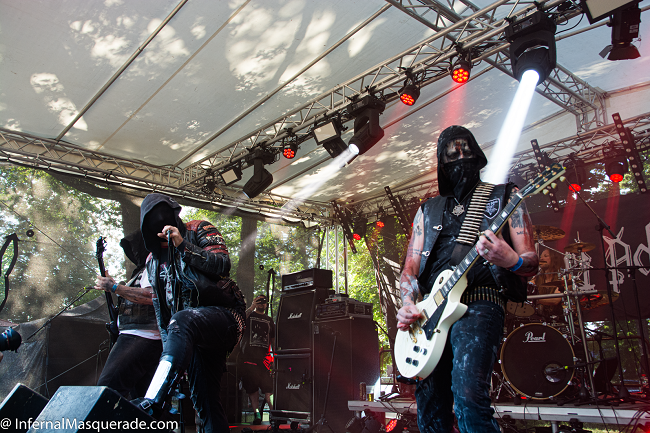 Next up, was another band that we have wanted to see live for quite a while: Arkona, from Poland. After being blown away by their 2019 release “Age of Capricorn”, we wanted to see how this energy transferred to the live setting. The band’s raw power was instantly felt by the crowd thanks to their powerful guitar-driven sound that enveloped the stage and crowd with a hypnotic haze. Shaking things up a bit, Italy’s Whiskey Ritual and their Black 'n' Roll, completely changed the mood with a sleazier and intense perofmrance. Fronted by Dorian Bones, the band’s sound is quite engaging and their on-stage chemistry is brilliant, making them one of the most entertaining bands of the event. 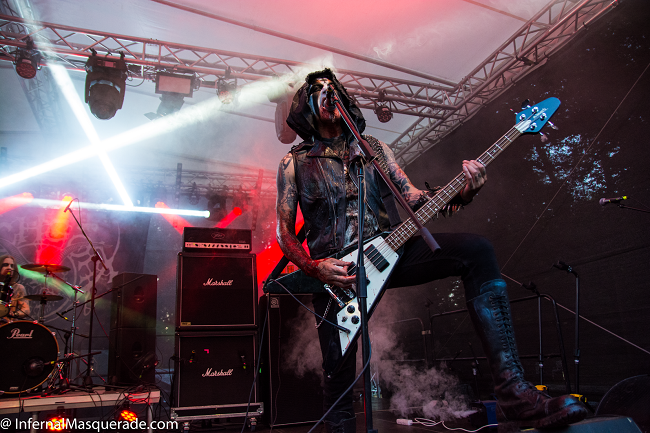 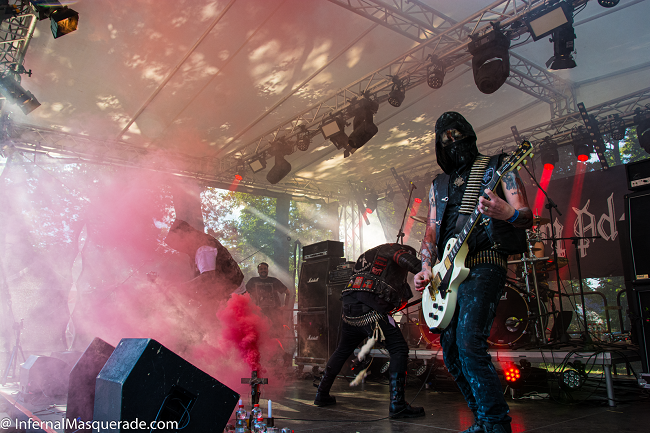 As the event came to near its conclusion, Archgoat took the stage with the punishing intensity of their Death/Black Metal hybrid style. We’ve seen the band in the past, and their performances are usually pretty intense and to the point, no place for any shenanigans or pose. Swedish Melodic Black Metal legends Naglfar took eight year between albums and now from the high of “Cerecloth”, released in 2020, the band is touring and surprisingly was playing this smaller event. Playing to one of the largest crowds of the weekend, the band unleashed a very intense and engaging performance, with Kristoffer "Wrath" Olivius interacting with the crowd and the band to create a memorable performance.

Finally the time arrived for Psychonaut 4 to take the stage with their Georgia brand of Depressive Black Metal. As one of the weirdest and intense outfits we have heard. Opening with one of our favorite tracks, “Tbilisian Tragedy”, the mood got dark and pretty weird (in a good way). While there are intense sections and hellish screams in the band’s music, there is a certain underlying bizarreness in the band’s melodic and depressive elements. For those that are looking for something weird, but quite intense and unique, this band definitely takes things to whole new levels with their bizarre take. Giving a crazy good show, we left after the band covered their set time with a huge smile on our faces and were completely exhausted from such a great day. 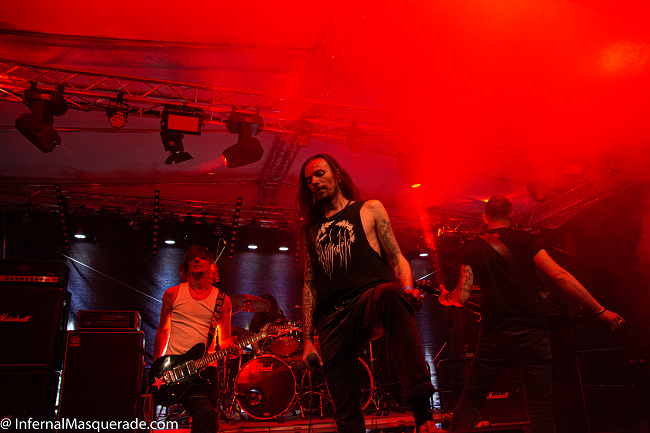 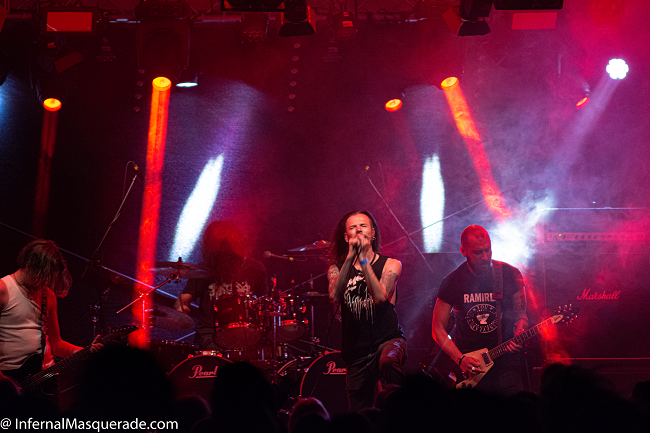 Overall, UTBS 2022 is one of the best festivals we have attended in terms of organization, friendliness, bands curation and sound. While it is not extremely easily accessible via public transport (particularly at night), the organizer provided a shuttle to accommodate people that don’t like to camp. We would like to thank Jörg Schröder for hooking us up and making this coverage possible, and all other people that we had nice chats with over the weekend.