What better way to close this summer filled with festival for Infernal Masquerade than to make our way back to Bergen, Norway and attend this relatively ‘young’ festival. Boasting an impressive line-up with bands like Cult of Fire, Mgla, Vemod and The Ruins of Beverast among others, and headliners like Master’s Hammer, The True Mayhem and Enslaved, and a venue as impressive as USF Verftet, this small festival promised to deliver and action-packed weekend.

Part of the experience in visiting Bergen is definitely the majestic train ride from Oslo to Bergen that takes over 5 hours, but it treats you with some amazing vistas of the Norwegian country side while traveling in the comfort of their perfectly run train system. Once in Bergen, the ‘main’ part of the city is perfectly reachable by foot from the train station, allowing visitors to reach their hotels near the festival venue in less than 20 minutes, and the venue itself in less than 30, talk about convenience!

Once settled, we unfortunately missed the festival’s opening band: Whoredom Rife, but luckily, we arrived just in time for the ritualistic set of Czech band Cult of Fire. Wearing hoods and featuring an altar, the band’s performance had some similarities with that of Bathuska, but their sound truly differentiates them. After a very hypnotic performance, it was time to get drinking! 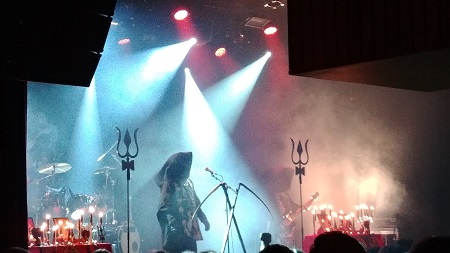 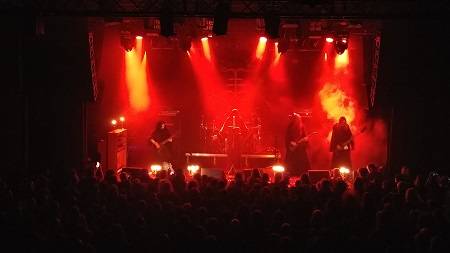 Norway’s Dark Sonority was up next, delivering more Black Metal to an already very exciting night. The band’s sound was definitely a bit different from Cult of Fire and yet the evening seemed to flow just perfectly. The highlight of the night, for us at least, was Mgła and their furious music. We have seen the band before at Steelfest, but we were definitely looking forward to seeing them in a smaller and more intimate venue, just like USF Verftet. Pummeling through tracks of their 2015 release “Exercises in Futility” and the earlier “With Hearts Toward None”, the band takes a commanding presence on stage that separates them from other bands in the genre. 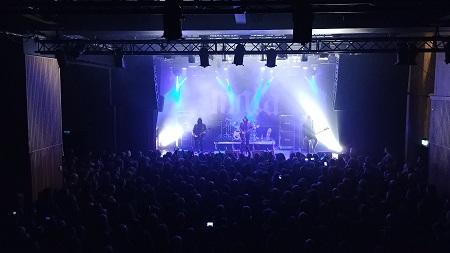 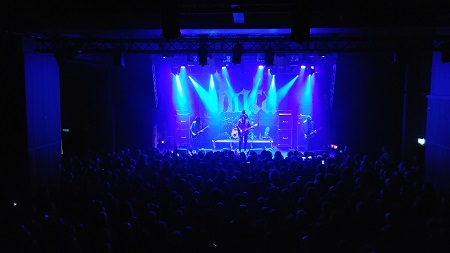 Closing the night, we had Czech Republic’s legendary Master’s Hammer and their old-school Black Metal that influenced tons of bands over the years. Reforming back in 2012, the band’s touring activities are pretty impressive as we have managed to see them at least 3 times in the last six months. We are not huge fans of their music, but their interesting stage setup and engaging stage presence allows for them to give a pretty decent show.

As a first day, we managed to check out some great Black Metal and enjoy ourselves in the very spacious venue. We are sad we had to miss Bardspec at Garage, but we had to deal with some conference calls from work. However, this allowed us to get back to our hotel and recharge our batteries for another equally intense day.

Slowly making our way out of bed on the second day, it is quite awesome that the main venue has bands starting at 7 pm. We tried to get into Garage to see the first few bands at 3:30 pm, but we saw a large amount of people gathered and got discouraged as the place is quite small so we went to drink in one of the many options that Downtown Bergen presents. Once at USF Verftet, we arrived just in time to check out Iceland’s Misthyrming and their crushing set.

Having seen the band before at their secret show during Roadburn 2016, we were eager to see them unleash the fury of their music upon the Beyond the Gates crowd. As the day progressed, we saw a so-so set from American outfit, Negative Plane, a band that we didn’t quite get into it but it was a good warm-up for one of our biggest objectives of the festival: The Ruins of Beverast. 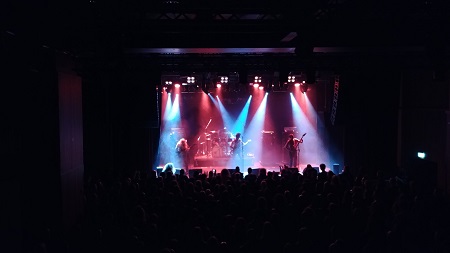 With the release of “Exuvia” earlier in the year, we were quite eager to see this very unique band live and they certainly did not disappoint with a ravaging and powerful hypnotic performance that had us at the edge of our spot, fully enjoying the raw and atmospheric elements of this German outfit. After such an amazing performance, the night continued to get better and better with Norway’s Vemod and their mesmerizing Black Metal. The band’s show is always perfectly executed with such intensity that you don’t even know what is coming when you see the band get on stage. 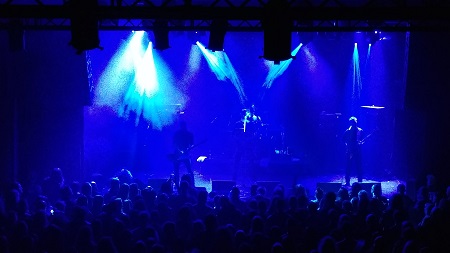 With three killer and very unique Black Metal outfits warming up the day, it was time for Revenge’s aural devastation with their pummeling Black/Death Metal with Grindcore elements. As a trio, this was definitely one of the loudest and most punishing bands of the day and the whole festival. Weirdly enough Revenge’s set started with a full house and many people seemed to venture out as the set progressed, there was a pretty extreme contrast between the Canadians and the opening bands, and some people seem to want to save their energies for the evening’s main course: Mayhem. 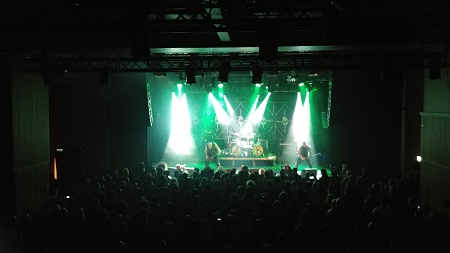 Playing “De Mysteriis Dom Sathanas” in its entirety, this legendary band perfectly sets a very somber and eerie stage presence that magically fits the albums decadent sound. Pummeling through tracks like “Freezing Moon” and “Life Eternal”, Attila Csihar definitely gave a super creepy live show that lived up to all expectations from fans. At this point the venue was almost to capacity with everybody listening and observing what was unfolding from every possible angle, like on a trance. 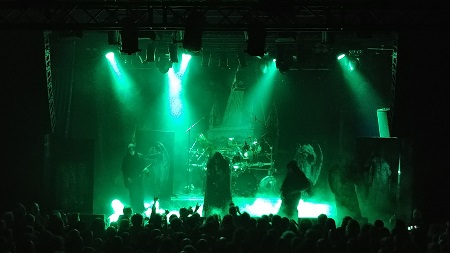 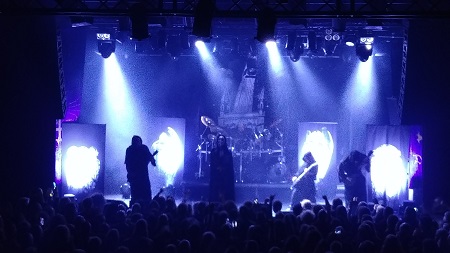 One of the advantages of having Beyond the Gates in Bergen, Norway is that the town offers plenty of options to eat, drink, and sightseeing, making it quite the ‘holiday’ destination for people traveling from around the world for this event. Before the third and final day of the festival, we managed to walk around town and enjoy the sights. 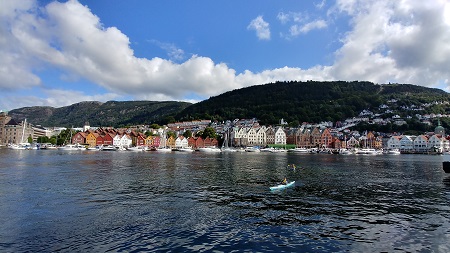 The last day started with some changes in the line-up that included Sumerlands not making it to the fest due to flight issues and Sahg stepping up to cover for them. We actually quite enjoy this Norwegian outfit and they did a great job filling in and delivering their awesome Proggy music to the ‘early birds’ in the crowd. With such an opener, there was a clear shift in the music direction this day was taking, from Black Metal to other more diverse genres. “Black Magic” continued the day with their Psychedelic music that drew quite a solid crowd for an ‘early’ performance.

Switching gears, old-school Speed Metalliers Exciter cranked up the volume and the intensity with their blistering old-school tunes and great stage intensity. While not our cup of tea, the band did deliver a killer set with intensity and poise. Not being huge fans of Mercyful Fate/King Diamond, we opted to skip Denner / Shermann, as we are definitely not fans from the band. 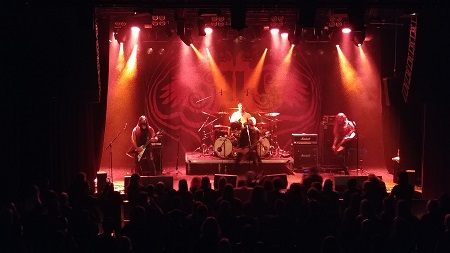 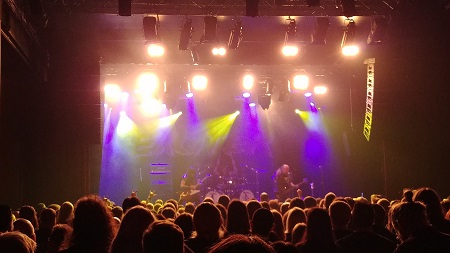 Closing the festival, we have Enslaved playing their debut album, “Vikingligr veldi” in its entirety, quite a monumental and (hopefully) a one-time event. The band has constantly improved over the years and while their latest stuff is awesome, it was quite amazing to hear them play an album that probably got a lot of the attendees into Metal music when they were younger. 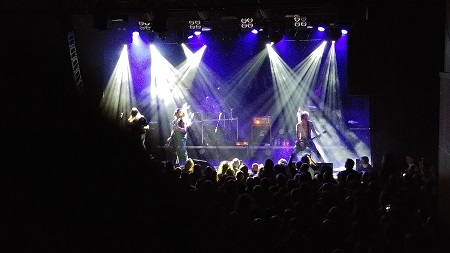 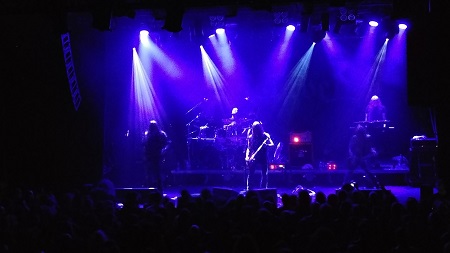 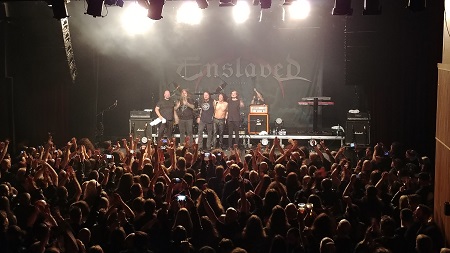 After such a powerful set, we are left completely blown away by the quality and intensity of the band’s performance. Overall, we are left with a great impression of Beyond the Gates as a festival, we have enjoyed our time in this excellent venue and feel that this is definitely one of the best organized festivals in this very crowded space. The organization has done a great job in delivering expertly curated bands, special sets, and the facilities to have a great time and enjoy music at its fullest. We want to thank the people at Beyond the Gates for making this review possible and are looking forward to returning to this fine event. For those of you that like to plan well in advance, the 2018 installment of this event has already been announced for August 23 to 25th, 2018 and features killer bands like Mysticum, One head one tail, Bolzer, among others, here is the Facebook event LINK.