After a brutal first day and with jetlag following us, we managed to get out of bed in early enough to catch some of Eindhoven’s sights, shopping, and an extended visit to the Holland Casino for some more beer money. Making our way back to the Effenaar just in time for Excrementory Grindfuckers and their crazy on stage antics that involved a ladder and a bunch of funky parody songs, we managed to have a blast seeing this band with a very small audience. With the unlucky cancelation of Thyrfing, Talanas stepped up to the plate and delivered an interesting Doom-ish performance. Lead by their charismatic singer/guitarist and their growling keyboard player, the band seemed a bit uneasy on the larger stage but still managed to give a solid performance.

With the 11th Hour high on our list, we made it to the small crowded stage and got a decent spot up front. Led by Ed Warby and Rogga Johansson, we quite enjoyed their devastating doom onslaughts, but Ed’s clean vocals got a bit tired some after a few songs. This is exactly what happened when we review the band’s music on CD, and sadly it had the same effect on our live experience. Going back to the main stage, Aborted was next and we sure as shit new that their show would be more exciting. With Sven de Caluwé being the only remaining original member of the band, they still gave a very intense and well-crafted performance. Sven’s intensity on stage is quite unrivaled and as always he didn’t disappoint. 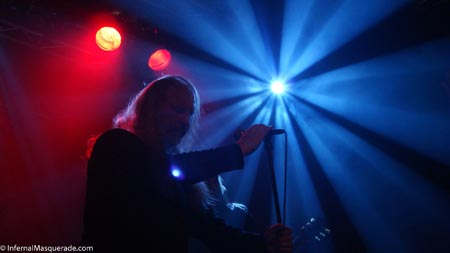 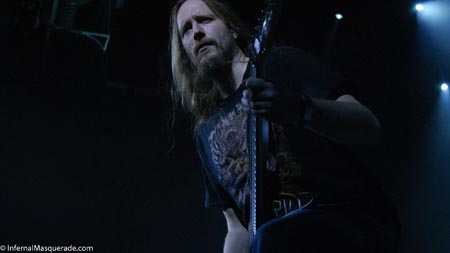 Krux kept the Doom Metal rolling with a solid performance, but not fully being in the mood for traditional Doom we just took some pictures and caught a few songs before heading for some more beer. Changing the pace of things the Deathstars came up on stage with their typical costumes and their catchy Gothic Metal. Interestingly enough, plenty of people in the crowd were quite enthusiastic about their different-but-good performance. We personally liked the change they introduced to the activities of the day and replenished our Metal cravings for the following bands that include My Dying Bride, Sodom, and the mysterious The Devil’s Blood.

Cutting the Deathstars set short, we made our way to the smaller stage in order to find a good spot for The Devil’s Blood ritual. We have wanted to see this band live for years and missed them back in the USA, so there was no excuse to not see them live this time. Creating a thick atmosphere, the stage seemed to be possessed by occult magic as soon as the band members took the stage filled with blood and their charismatic singer arrived. With their music charged with mystical and occult references, the band quickly established a very magical vibe for their set. Going strong through some of their hits like “She” and their longer and more intense songs, the band’s guitar section sounded amazing, almost exactly like on their CD’s. With their vocalist lighting candles and keeping a very reserved stance on stage (no crowd interaction) the band demolished their set with a very mystical shroud and great intensity. We have been ton hundreds of shows and we have rarely felt such an extraordinary vibe like the one we just witnessed. 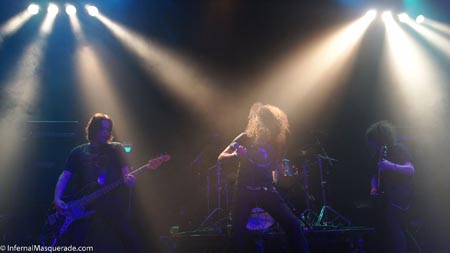 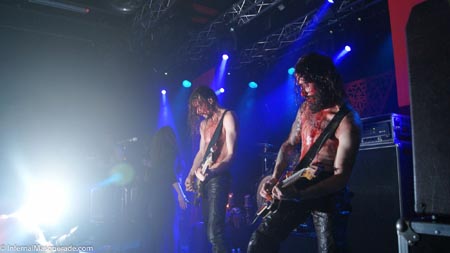 My Dying Bride was next on the main stage, another one of our top 10 bands of all time. We needed to come out of TDB’s trance before we fully got in the mood for some more Doom. With such a charismatic vocalist as Aaron, MDB always delivers a very moody and crushing set. The riffing is as thick and depressing as on their CD’s, but Aaron’s theatrics are just amazing, bringing all songs to life. With the return of the violin on the band’s latest albums, they also brought that element into their live show making it one to remember. Playing songs from their heavier days really got the crowd going and make us headbang from beginning to end. After seeing the band countless times in the last few years, they still never get old.

As huge Metal fans we are, we have never seen Sodom live, so we had to get liquored up before having this experience. With Sodom taking the stage around 11 PM, we were barely standing still thanks to the jetlag and sheer exhaustion of witnessing so many bands at once. We live in a very remote part of the USA so we rarely have shows, so we make up for it by going to festivals for an overdose of music. Anyways, being quite compact, Sodom cranked up the volume to 11 and pummeled their set with high octane riffs and excellent drumming. Leading the Thrash onslaught, Tom Angelripper and company really nailed their set with epic intensity and surgeon-like precision. We love how the ‘old’ bands usually have their shit together and always deliver precise and well-crafted sets of old and new hits. 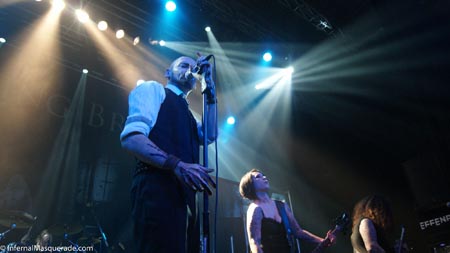 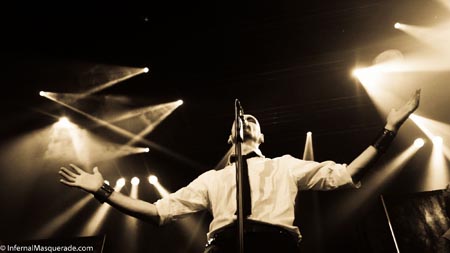 Packing in our camera gear, purchased swag, and our crushed spirits (in a good way), we had to say goodbye to EMM 2012 and its excellent venue. The organization of this event was top notch, with no incidents happening and crystal clear sound for ALL performers we saw. This festival was by far one of the best we have witnessed so far and the facilities and services were up to standards and were able to handle the large volume of people quite well. We would like to thank everybody at the photo pit that behaved as they should, minus that one douche taking pictures with a flash. We also like to thank TMR for hooking us up with the press credentials and making our experience in this festival a magical one. Also, we would like to thank everybody we met at the event that provided excellent Metal conversations and camaraderie. We are quite pleased with this event and if the line-up is as impressive next year, we will surely be back.

Visit our gallery of two one here.