After having a very good night sleep, more like passing out after all the standing up and drinking beer of the previous day, we made our way to Tilburg in the morning. Having quite a different variety of little cafés and restaurants in its downtown area, we had a refreshing brunch consisting of toasties and beer. We then made our way to the 013 venue walking around different side streets trying to see what kind of cool and interesting places we could find on the way there. Lucky enough, we bumped into our old buddy from Hellfest 2009, Daniel, from Music By Dan’s web blog. After talking for a while, we head over to Het Patronaat, our house for the day, to watch Dread Sovereign (not so impressive) and the much hyped Kadavar. Hailing from Germany, this psychedelic Rock outfit delivered quite an impressive and engaging performance.  This band sure knows how to rock and had people going crazy immediately since the opening of their set, and even during their soundcheck! The band’s drummer, Tiger, gave one hell of a show and had the entire crowd going as soon as he started drumming. 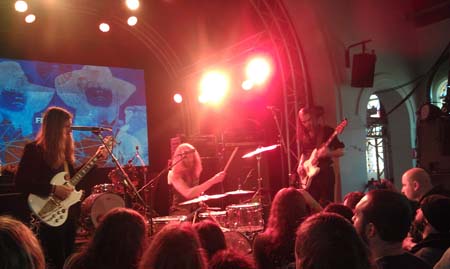 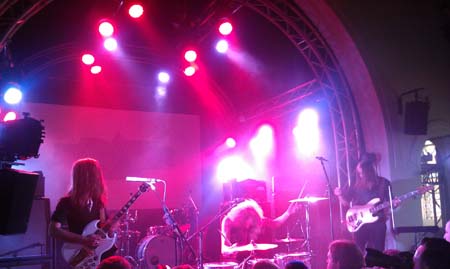 Immediately after Kadavar we dashed to the Main Stage to catch Sabbath Assembly and their creepy psychedelic/occult music. Being huge fans of the band, and after being blown away by the eeriness of their set at Stella Natura 2012, we had the biggest expectations for them. Sadly, we got very disappointed by their set, since the atmosphere was very different and the band seemed to be lacking some of the key members they had on their live gig at Stella. The female backing vocalist was gone, and replaced by some dude (the Hexvessel trumpet/keyboardist we think) that was very dull. The creepy dude with the keyboards (and backing vocals) at Stella was replaced by some odd guitarist that seemed like he was tripping while playing some solo’s that were intended to replace the killer psychedelic keyboards. Jamie Myers and Dave Nuss nailed their parts, but their backing musicians were very weak and delivered a subpar performance in our opinion. One cool thing was that they had Genesis Breyer P-Orridge doing the creepy spoken sections of their hymns. While we have to say that their performance was not entirely bad, it just felt very different and less psychedelic/eerie than the first time we saw them. 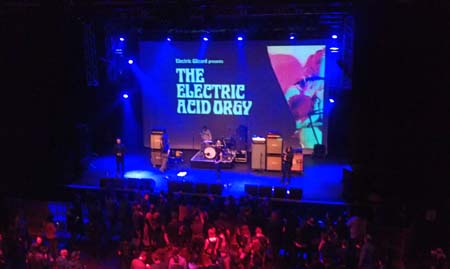 After the so-so Sabbath Assembly set, we made our way back to Het Patronaat and managed to catch the very inspired ending of Witch Mountain’s live set, another band we will have to catch at a later date.  We made our way to the front of the stage again in order to see one of the bands we flew all this way to enjoy: Hexvessel. Not disappointing in one bit the band delivered their apocalyptic psychedelic doom/folk to a very diverse audience. The highlight of their set for us was their cover song “Woman of Salem” that featured Rosalie from Purson performed live with the band as a special treat. Very excited about their amazing performance, we also found out that they will be returning to the US to play Stella Natura 2013. After such an excellent show, we got some more beers before another Infernal Masquerade favorite: Les Discrets. 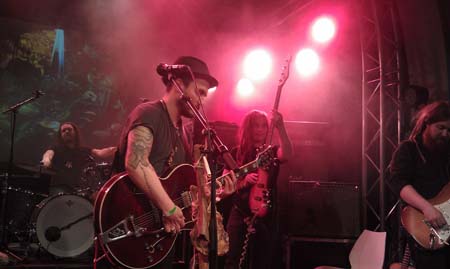 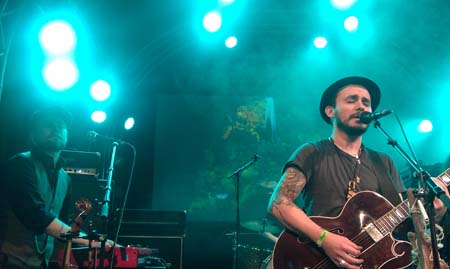 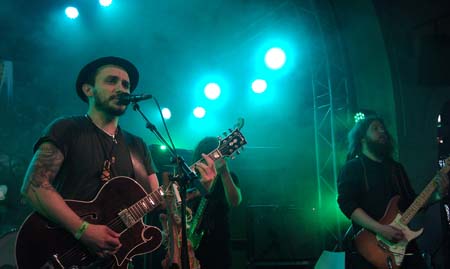 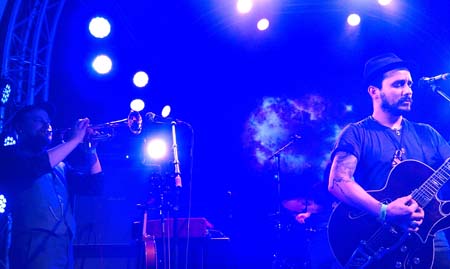 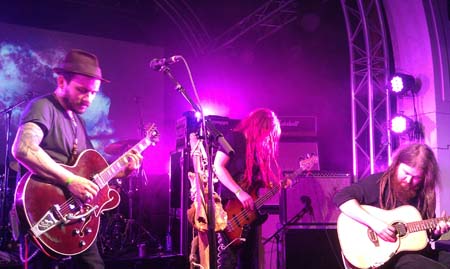 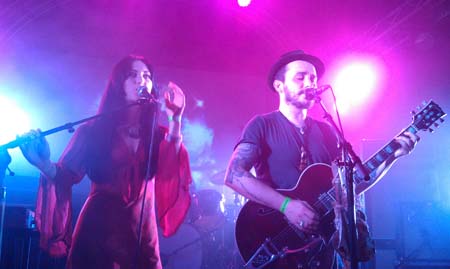 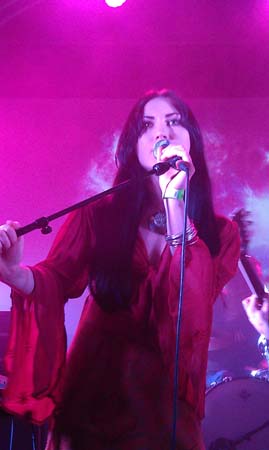 Having been huge fans of the band, we attended their magical first show at WGT in 2011 so we were looking forward to this one for months. The band playing with Neige (the artists in residence) on bass guitar for the last time as well as long-time drummer Winterhalter, it was guaranteed to be a very special evening closing a stage of Les Discrets musical path. Lead by charismatic front-man Fursy Teyssier, the band had a very powerful set playing songs form their two releases and a cover of Amesoeurs to please the crowd. Closing their set with the crowd’s favorite “Song for Mountains”, Fursy showed off his guitar wizardry nailing this track perfectly. Again with a bittersweet taste of being the band’s last show with Neige (and now Winterhalter) we think we became even bigger fans of them. 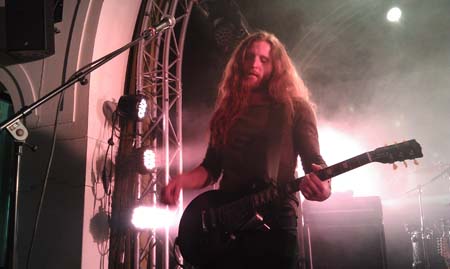 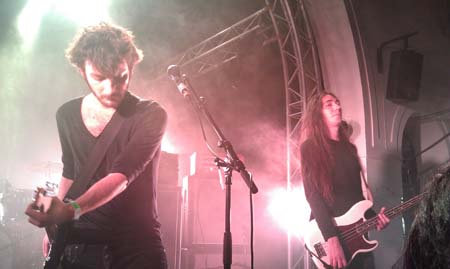 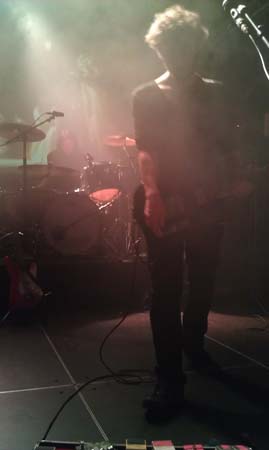 With no time to waste, we immediately made our way to the tiny Stage 01 for the rare performance of Void Ov Voices on the Electric Grindhouse Cinema festivities. With the interesting concept of exploitation films topped with a layer of Attila Csihar vocal torture, Void Ov Voices sounded excellent on paper… but as the movie kept getting weirder and the vocals just kept going nowhere, people started to leave and so did we after 20-30 minutes of just the same stuff. We have to say that while disturbing and very weird, it was also kind of lame in our opinion (and apparently for many others too). After going out for a quick smoke, we headed back into the Main Stage to prepare for some Doom with pioneers Electric Wizard. The place was super packed for their performance, making it quite hard to find a little nook to take a peek at their crazy psychedelic displays of naked women and weird stuff. Having seen the band several times before in smaller and less packed venues, we decided to stay for a while and then try to make it to watch Goat. Goat’s performance was probably one of the most expected ones of the day since Het Patronaat was filled to capacity making it nearly impossible to see anything (we at Infernal Masquerade are not too tall), so we decided to call it a night and head back to our hotel in Tilburg.

Overall, Day 2 was another excitement filled journey of 8+ hours of killer music with a great sound and the perfect location for chilling and to hangout while not enjoying a band. One small annoying details was the people not respecting the DO NOT SMOKE policy of the venue and just lighting up in the middle of packed and sweaty venues like the Green Room and Het Patronaat. Being smokers, we don’t understand why people can’t just wait until the set of the band is done. Same goes for a ton of people smoking weed while the bands are playing; this is not an outdoor event! So please don’t do it.