While making our way through our bucket list of Metal/Extreme Music festivals to attend in our lifetime, we always passed on Roadburn due to its non-traditional schedule being in April. However, all the stars aligned in 2013 for us to be able to attend. Coincidentally, the festival also had one of their best ever line-up’s (in our opinion) with almost half the bands playing being very high on our musical lists.

Planning for Roadburn is not an easy task since you have to buy tickets pretty much the day they go on sale since they run out very quickly. Besides the challenge of getting tickets, finding a reasonably priced place to stay becomes quite a challenge if you didn’t book at least 8-10 months in advance, even when the tickets went on sale, the hotels were mostly all booked. So the Infernal Masquerade staff had to make a quick decision and decided to stay in the little city of Oosterhout. While the option of staying in Eindhoven would have been more convenient (rail connection with Tilburg), we decided for a new location to explore since we already stayed in Eindhoven for Eindhoven Metal Meeting back in December of 2012. Staying in Oosterhout meant a 1 hour bus ride every day (times two) to Tilburg, but it was quite relaxing since we could sit on the bus and rest our tired legs from standing watching bands all day. On hindsight, if we go back (which we probably will in a few years) we would stay either in Breda or Eindhoven since they both offer rail connections with Tilburg and the 013 venue is walking distance from the main train station.

Having figured out all our transportation logistics, we ventured into Tilburg the first day of the event a few hours before the time to exchange of tickets for our festival wristbands. Thanks to the good organization of the event, there was almost no line to get our tickets exchanged and we managed to do it in 10 minutes, a very impressive feat considering we have stood in line for our wristbands at other festivals for over 3 hours.

Once we had our wristband, we explored the venues locations and logistics to maximize our efficiency when it was time to switch venues and get a good spot to watch the next band on our list. To our luck, the 013 venue has the Main Stage, the Green Room and Stage 01 all next to each other making it very convenient. While the Main Stage and the Green Room are very easy to find, we had a bit of a hard time finding the tiny Stage 01. A little issue we had was that the Green Room is quite small, but with proper planning we could get an awesome view from its balcony. The same goes for Stage 01, it was nearly impossible to see any bands there in the first day, but at least we didn’t miss any of our essential bands. The coolest venue in our opinion was the cozy Het Patronaat and its excellent stained glass windows and wooden floors. The venue was also located within steps of the entrance to 013, making it very compact and well laid out for those situations when we had to run from one venue to the next. The hangout area between the venues is an awesome place to meet people and smoke while waiting for bands or just chilling in the sun. The cafés close to the venues were a killer feature to sit down and relax while enjoying a cold beer and people watch for the downtime between favorite bands. In general this is a very different atmosphere that we have experienced in other festivals were you are in the middle of nowhere and have to stick to the very limited options of food and sitting down places they have.

Before making our way to the first band of the day, we found the merch area located in front of the 013 venue and picked up the mandatory festival shirt and some of the awesome posters they had for sale. One of our biggest pet peeves being from the USA is that nobody wants to take credit cards, this is really annoying and we think that people should get on with technology and get something like Square or similar things that people can add to their phone to accept payments via cards. Event local bands in the USA do this now and from what we have been told, they sell more merch at shows since people carry cash for beer not for tshirts and CD’s. After finally getting our gear, we made our way to Het Patronaat to watch The Black Heart Rebellion, but before we had to pick up some drink tokens, which again, did not take cards (at Het Patronaat, we later found that they did take cards if you bought them at the basement of 013), pretty pissed about this we still pick up plenty of tokens and prepared to enjoy the evening.

Our first band, The Black Heart Rebellion, was a surprise pick since we never heard of them and pretty much didn’t like them so we shortly left to watch some of the Pallbearer set. Pallbearer’s powerful music sounded great at the Main Stage, and we quite enjoyed a few of their crushing tunes. Not being our favorite band ever, we made our way to have a smoke and hangout a bit outside while waiting to watch The Atlas Moth at Het Patronaat. Being one of the band’s we wanted to see at the festival, The Atlas Moth did not disappoint…. musically, since their songs were as crushing as on their CD’s, but their stage presence was kind of dull. In particular, the harsh vocalist/guitarist kept asking for drugs and stuff while looking like he was stoned or something, probably not their best moment, but their music was excellent. One thing we noticed is that the band did not play the full hour listed and left the stage with almost 15 minutes left on their hour. This was very consistent with most of the bands that played at Het Patronaat leaving the stage 10 minutes or so before the time they were supposed to be done. 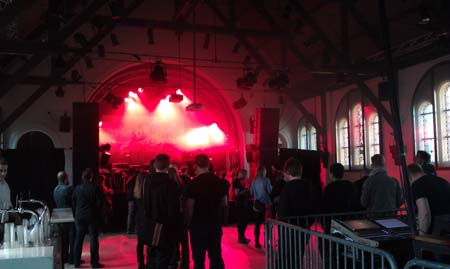 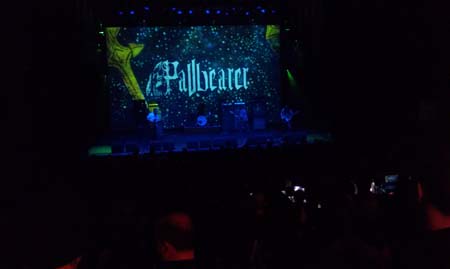 Taking a little break before watching the first standout of the day, Gravetemple, we made our way to the Studio Café to enjoy an epic Roadburn Burger and a beer. The proximity to the cafés from the venue, as we mentioned, makes it very easy to enjoy great food sitting down in-between bands. We finally arrived to enjoy the experimental super-band comprised of Oren Ambarchi, Stephen O'Malley and Attila Csihar. With a very eerie atmosphere the band’s weird compositions greatly filled the Main Stage with sonic abuse and the creepy vocals of Attila. While Gravetemple’s music is awesome, we felt that we enjoyed it more in their Le Vampire De Paris CD, than actually live. We then made our way back to Het Patronaat to catch the last few minutes of what seemed to be a very intense set of Royal Thunder, a band we will surely have to catch live in the future. 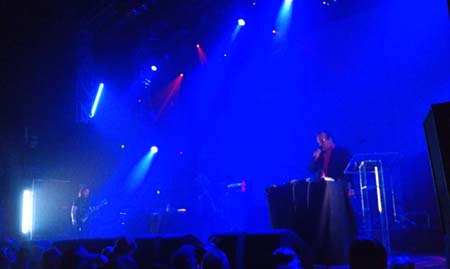 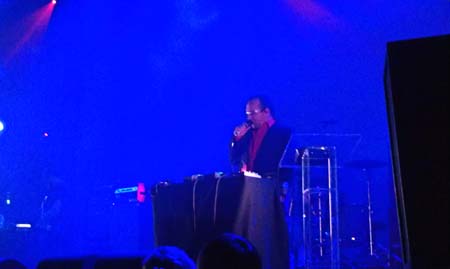 Making sure we got the best spot possible, we made it to the front of the stage for one of the bands we have been expecting to see live for years: Lantlôs. With all the anticipation built-up, the band came on stage and delivered a completely crushing performance. The band’s amazing Post-Black Metal was brought to life perfectly with Neige (Alcest) on vocals and with Herbst providing some powerful backing vocals as well. The band’s set-list consisted of Intrauterin, Bliss, Melting Sun (new song), Eribo, Coma and Minusmensch, and all track sounded perfectly when compared to their CD versions. The sound was extremely loud and made all the band’s guitar FX pedals and bottles of water shake on stage…. perfect for their brand of music. As the best moment of the day, we have to say that Lantlôs blew us away and from the looks of their new song (Melting Sun), their upcoming release will be a killer one. It is also a bittersweet performance since it will be the band’s last show with Neige on vocals as he left the band for any future live performances and/or recordings. 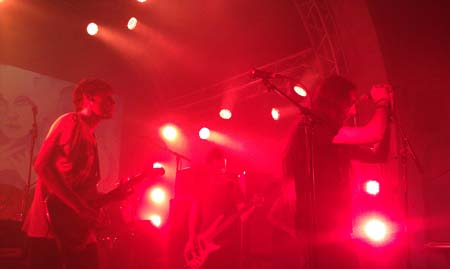 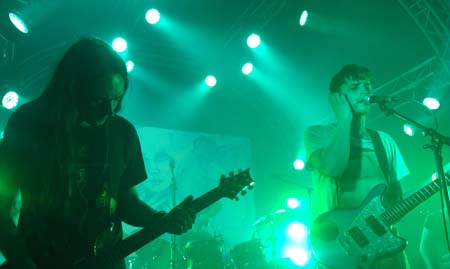 After being completely floored by Lantlôs, we left Het Patronaat for a smoke break and chatted with a very interesting girl from the UK that was equally excited about having seen Lantlôs that evening. We then tried to find our way to Stage 01 to watch some of the set of Castle, but after getting lost a couple of times we finally ended up all the way out in the hallway since their performance was packed by eager fans. Having failed at our mission, we tried to check out Maserati at the Green Room, and the same thing happened: it was full. So we listened for a bit from the hallway while enjoying a beer and then we made it to the Main Stage balcony to have a pretty good view of Primordial’s set. 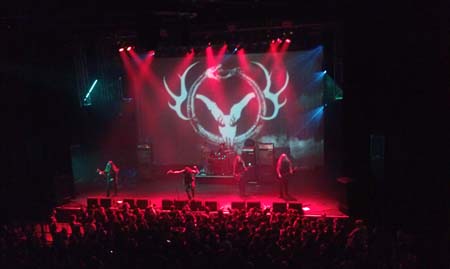 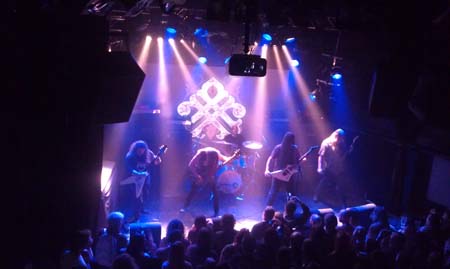 With Primordial delivering their classic hits flawlessly, the crowd got pretty into their set and their melodic Celtic influenced Black Metal sound. After listening to their set for over 45 minutes, we decided to make our way to the balcony section of the Green Room in order to watch Death/Doom Legends Mournful Congregation deliver their 10+ minutes long songs filled with weeping guitars and crushing growls. Having seen the band at Stella Natura 2012 under falling ashes in the middle of the woods, the atmosphere at Roadburn was not even close to being that awesome, but they still delivered their music with gusto and heaviness.

Having to catch the last 127 bus of the night, we had to miss the set of Mourning Beloveth and Herder, but after the amazing first day we had, we understood that a sacrifice had to be made. For the first day of this legendary festival, we already had had a wonderful experience and it was just the beginning.