Infernal Masquerade: Tell us a bit more about the concept and ideas behind "The Arsonist".

John Gahlert - Deadlock: The main focus of the album was to deliver more to our fans – more content, more images, and more details. That's why we thought of illuminating all sides that the word "arsonists" include - like religious hysteria or mass media that brainwashes our society.

I.M: How much do you think this concept differs or builds up, on the previous albums from the band?

J.G - Deadlock: We see it as a sequel - on our early albums we focused on human and animal rights - and in the end all leads to the question if humanity handles itself with care. Of course we all do live in the same society and we are small cog in one big wheel but if you have the possibility to speak your mind on that level you should do it.

I.M: Sound wise it sounds different and with a more groove/modern metal touch. What did you guys set out to accomplish on this one?

J.G - Deadlock: Every part, every vocal line and each and every played note had to live up to the expectations of all band members. In general here are two main pillars the Deadlock house is built on. An extreme side, if you want you can call it deathcore - we prefer to call it metal - and a melodic one. Our Goal on "The Arsonist" was to expand the boundaries of our music and push both sides to the max without losing our trademarks.

I.M: How do you think people have reacted so far to the release?

J.G - Deadlock: well I guess the highest pressure is created in our own minds. We had high pressure during the production process. But in the end the first reactions from the press and from our label were pretty awesome, so we’re looking forward how the fans react to the album. There are always fans that want a band to write the same album again and who might be disappointed because of a change in style, but the majority of our supporters know that this does not work when it come to a deadlock release.

I.M: Originally you played bass guitar and recently switched to vocals, please tell us how/why this happened and how comfortable are you with your new role in the band.

J.G - Deadlock: When our former vocalist Johannes left Deadlock because of his job and family I took over the over the vocal duties, because we were in the middle of a tour. As long as I remember I sang in different metal bands - so I really like my new job and to be honest - a thousand times more than playing bass :) The most important thing for the other members was that it worked between Sabine and me from the beginning.

I.M: Is the straight edge influence still present in the band? or has that faded over the years?

J.G - Deadlock: It has faded - even if some members are still straight edge. The ideology of straight edge should be handled as a personal attitude and not as propaganda or as statement of a band. 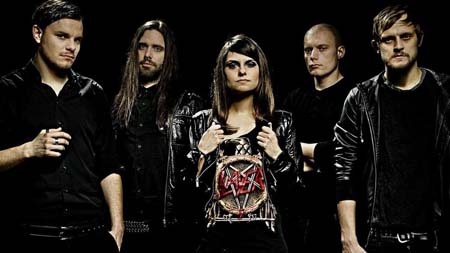 I.M: Fair enough. On "Manifesto" the band pushed the envelope with the incorporation of a hip-hop section into your music. I remember interviewing Johannes back in 2009 at With Full Force and him saying that using more elements like that in the band's sound was a possibility. Any reason why you guys left that avenue un-explored? Or was it just a crazy thing to do back then?

I.M: As a related question, how far do you guys think you want/can take your sound?

J.G - Deadlock: Oh - I guess our hip hop days are over, but it was a nice experiment. Let's say the general combination of hard stuff and pop elements is just the way we did it in the past and what we'll do in future. For "The Arsonist" we just wanted the hard and heavy parts to be harder and the soft parts even softer, while making the catchy parts catchier than ever to see where it will lead us. Our Goal was to expand the boundaries of our music and make it extremer on both sides.

I.M: What prompted the change from LifeForce Records to Napalm Records? And how do you guys think Napalm is handling this release.

J.G - Deadlock: I already used this in another interview in France – but It describes the situation pretty good: Napalm Records was interested in DEADLOCK for more than 2 years, but we had to fulfill our contract with Lifeforce. Don’t get this wrong – Lifeforce did a lot for DEADLOCK and we highly appreciated this, but you can compare it to the girlfriend thing – even if she’s perfect you think of somebody else…sometimes. DEADLOCK and our girlfriend Lifeforce decided to split in a good way after 8 years of relationship. Our new girl Napalm might be a bit older and speaks a horrible dialect (because they are from Austria), but it has the experience and the power to push us on a new level. They treat us very well and understand the way we like to work.

I.M: Hahahah, nice one! As our final question, anything in particular you want to say to the people in North America?  Also, any chances of making it over here with this release?

J.G - Deadlock: Everyone out there in North America who supports extreme modern music, and to all the faithful and awesome fans, who have been with us through thick and thin the last decade - Thanks you for keeping an open ear to all metal music on the edge of the "so-called" mainstream. We hope to get the chance to conquer the club stages overseas soon and work on a tour with high pressure-so keep your fingers crossed.

I.M: Thank you for your time and good luck promoting the release!

Read or review of "The Arsonist" here.

More info about the band: