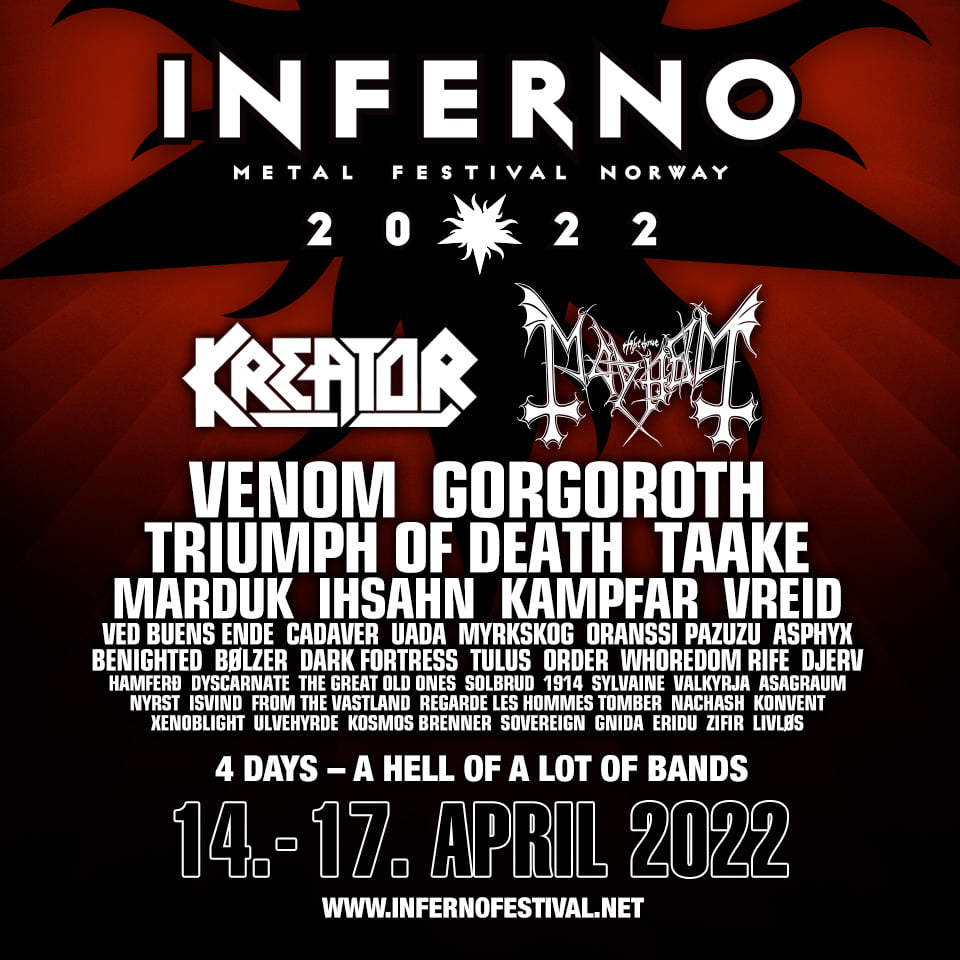 Order was founded in 2013 by Anders Odden, Rene Jansen, Kjetil Manheim and Billy Messiah. The four being respectively responsible for early-stage Norwegian death metal (Cadaver) and the origin of the Norwegian Black metal (Mayhem). In 2014, Jansen sadly passed away, leaving the project unrealized. The remaining members decided to move forward despite the setback. In 2015 Stu Manx (f. Gluecifer) joined the band and set the band back on its quest to make unpolished raw black metal. To honor Jansen the band released the demo tape “Folly Grandeur” with rehearsal recordings the following year and in 2017 the debut album “Lex Amentiae” was released on Listenable Records. Four years later Order released their long awaited second studio album, “The Gospel”.

It is now time to bring the band back to Inferno Metal Festival for another great gig!

These are the days that each band will perform at Inferno Metal Festival 2022. The line-up for all days are at Rockefeller and John Dee. Sadly L-G Petrov from Entombed A.D. just passed away – so one band is missing on the bill for now. There will also be club concerts that will be announced later.

For a more detailed schedule go to: https://infernofestival.net/no/festival/artistsschedule.aspx.

For tickets go to: https://tickets.infernofestival.net

We are happy to announce that all artists for Inferno Metal Festival 2022 are now confirmed. Only Amorphis had to say no as they already had plans for Easter 2022. This means that GORGOROTH and UADA are also ready for next year’s festival. We are also happy to announce that TAAKE will be the last band to complete the line-up. Inferno 2022 will be held from April 14-17th 2022. INFERNO METAL FESTIVAL 2022: Kreator, Mayhem, Venom, Gorgoroth, Triumph of Death, Taake, Marduk, Ihsahn, Kampfar, VedBuensEnde, Vreid, Cadaver, Uada, Myrkskog, Entombed A.D., OranssiPazuzu, Asphyx, Benighted, Bølzer, Dark Fortress, Tulus, Whoredom Rife, Djerv, Hamferd, Dyscarnate, The Great Old Ones, Solbrud, 1914, Sylvaine, Valkyrja, Asagraum, Nyrst, Isvind, From The Vastland, Regarde Les HommesTomber, Nachash, Xenoblight, Ulvehyrde, Kosmos Brenner, Sovereign, Gnida, Eridu, Zifir

If you want to get a refund for your ticket we will have a refund period from March 1st. Further details on how to proceed to get a refund will be sent to all ticket holders by e-mail at that date.

We look forward to seeing you all again in 2022.