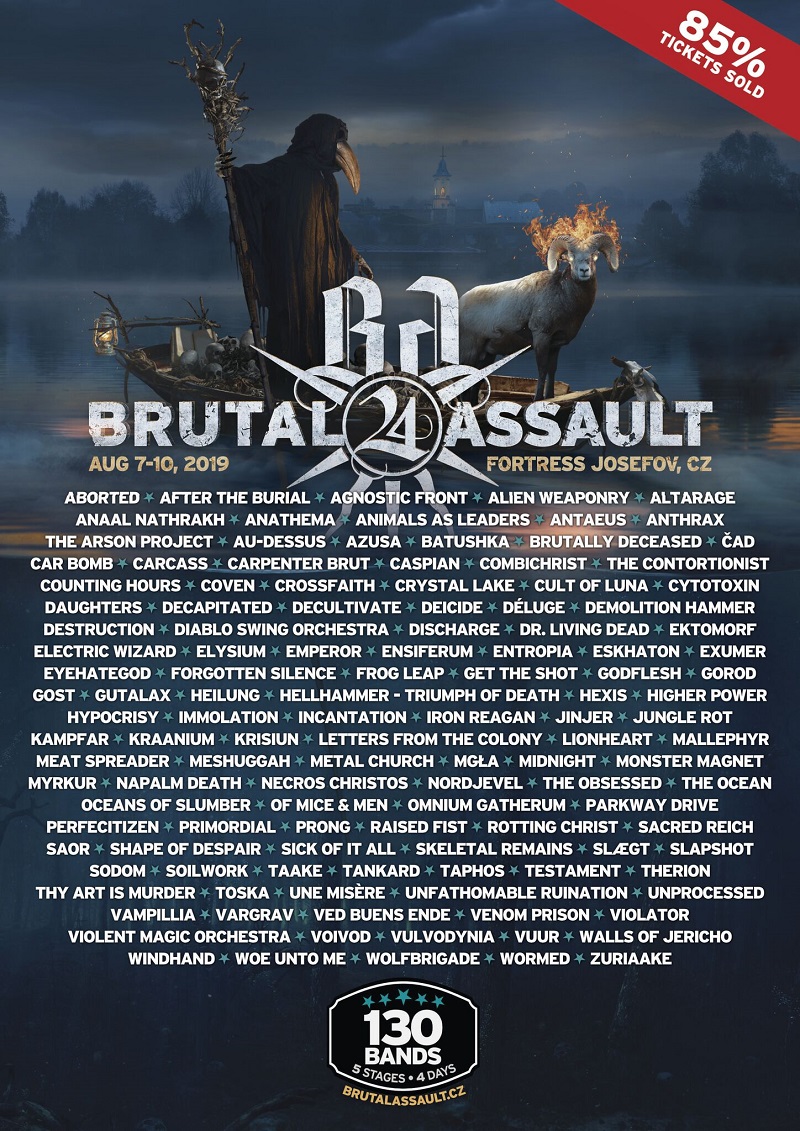 BRUTAL ASSAULT 2019 LINE UP IS FINALIZED

Brutal Assault festival with its 24th volume invites the fans to the Josefov fortress. The lineup is not based on all-capturing headliners but is delicately curated and presents motley collection of more than 130 artists, that will widen your horizons. The festival also celebrates other forms of dark art with exhibitions, talks or cinema and offers great selection of fantastic drinks and food.

Early August weekends are marked red in the calendar of every metal fan, these days are reserved for Brutal Assault, a national holiday of the metal nation. The festival offers diverse and multifarious line-up that is not based on all-capturing headliners but works with interesting artists in every thinkable genre. The lineup is meticulously curated to contain both genre staples and new upcoming and interesting acts. Moreover, the festival always manages to attract artists that only seldomly perform live.

Brutal Assault festival is an anchorage of metal music and associated art with 130 artists, 5 stages, several art galleries, large stand across the main stages and extensive chill-out zone. If you have not been there yet, this festival is just another level of experience in dark art with cherry picked blend of refreshing underground bands and stellar headliners spread across diverse festival area located within 18th century military fortress. Among traditional festival features the festival area also offers luxury sanitary facilities, permanent horror cinema, underground mazes, huge metal market, art galleries, a lot of sitting spaces within the fortress walls providing shelter from the weather and tons of other attractions. Brutal Assault is mainly about music but in recent years it also started to resemble a food festival with vegan and carnivore and all kinds of ethnic cuisine, supplemented by a wide variety of best Czech beers starting from 1.5 Euro for half a litre (17OZ).

There are also rare appearances including Triumph Of Death fronted by Tom G. Warrior presenting live Hellhammer incarnation or the founders of true Norwegian avant-garde metal Ved Buens Ende, who selected Brutal Assault to play one of their only 4 live gigs this year.

However Brutal Assault is not strictly about metal. The Keep – Ambient Lodge (KAL stage) presents all kinds of experimental artists, live ambient or electronic music and the famous absinth bar. And nonmetal artists will also take over the main stages. There will be shows by synthwave neuromancers Carpenter Brut and Gost, neofolk choir Heilung, noisemasters Godflesh, the avant-garde ensemble Diablo Swing Orchestra or the Japanase freaks Vampillia. Brutal Assault is even not only about music and great food and beer. The festival celebrates other dark arts with exhibitions, hosts talks with scene personalities and screens documentaries. This year the festival presents an exhinition of the ultimate master of metal logos Christopher Szpajdel, who authored many of the mostfamous metal logos including one of this years big names; Emperor.

All that makes Brutal Assault one of the biggest and most interesting metal events in the whole world, while it still keeps friendly prices and offers affordable food and drinks with a rich selection of local and international cuisine and great Czech beer.